I have a lot of new people joining this blog, so it’s probably a good idea to remind people that the articles you’re reading are an experiment in publishing. I am combining a 19th century idea, publishing my book, JOY FULL Horses, in installments, with 21st century technology to publish it here as a blog.

If you’ve been reading the blogs from my first posting on January 2, 2016, you’ve been reading them in order, but if you are new to this series you are encountering them back to front.  My recommendation would be to treat this like the book that it is.  You wouldn’t want to read a Dickens novel beginning in the middle.  This is very much the same.  You will get so much more from these articles if you read them in order.

Click on the JOYFULL Horses tab at the top of this page to go to the Contents.  That will give you the links to all the articles.  It also makes it very easy to go back and find individual posts that you want to reread.

Also, please let your friends know about these blogs.  The more we share, the more people can learn about clicker training.  This is a great opportunity to introduce people to the fabulous relationships that clicker training helps us create.

Now on to today’s article.  The previous section was a long one with lots of how-to instruction.  Today’s post is much shorter, though it deals with an important concept: stimulus control.  Without this you can easily end up with a clicker mess instead of a clicker super star.

Getting What You Want
Our novice clicker trainer is learning a lot about cues.

1.) Cues and commands are not the same.
2.) Not all cues are verbal.
3.) Cues can come from inanimate objects.  You can have environmental cues.
4.) Our animals can cue us.
5.) Cues evolve out of the shaping process.

The list is simple, but we’ve covered some major training concepts. Now it’s time for another.

Cues and Our Eager Clicker Horses
Cues are great, but they are just the beginning.  You could have a great back up cue for your horse.  Every time you ask him to back he does so right away.  There’s no hesitation.  It’s a completely reliable cue.  The only problem is he also backs up when you ask him to go forward.  And he backs up when you try to groom him and saddle him.  In fact just about every time he sees you, he’s backing. 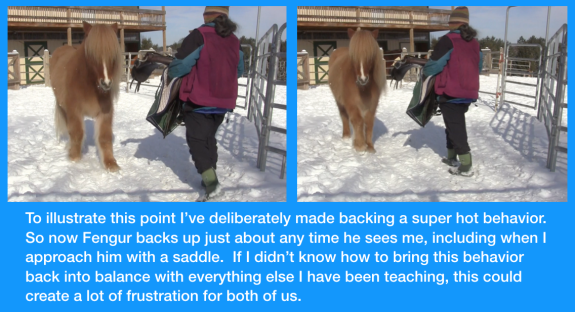 Your horse knows backing is a hot behavior.  You often pay well for it, so it’s worth a try.  And if backing doesn’t work, how about retrieving?  That usually gets a laugh and a treat.  How about handing you all the brushes out of your grooming bucket.  Will that work?

Clicker-trained horses can be great fun, and they can also be great pests!

When my clever clicker horse starts expanding on the games I’ve taught him, I keep reminding myself that I don’t want to make him wrong for offering the behaviors I’ve taught him.  I just need to understand that attaching a cue to a behavior is only half of the story.

Stimulus Control Version 1.0
When I was first learning about clicker training, stimulus control was taught using an extinction process.  Here’s how it was described:

You are teaching your horse to touch a target.  You would eventually like to say “touch” and have your horse orient to the target.  (Remember Number 2 of Ten Things You Should Know About Cues: Not All Cues Are Verbal. We’re a verbal species so, of course, we would feel that we don’t have the behavior fully developed until we have a verbal cue attached to it! https://theclickercenterblog.com/2016/02/14/)

We are reminded that saying “touch” before you have the behavior in place is not going to help you get the behavior.  If I held a target out in front of you and said “Rabish”, you wouldn’t know what to do.  Think of all the things you could do.  You could back up.  You could spin around. You could grab the target from me.  You could jump up and down, wave your arms, sing the “Star Spangled Banner”.

Who knows what the behavior is that the cue “Rabish” is supposed to elicit.  Based on your past history I could get all sorts of things besides simple targeting.  Before I add the verbal cue, I already want to be getting the behavior I’m after.

So the instructions tell you to wait for the horse to be consistently touching the target.  The way this was always described was this:

When you are so confident that your horse will touch the target that you would bet money on it, that’s when you add a verbal cue.

Now you say “touch” and you hold the target up.  Your clever horse touches the target, but of course he hasn’t suddenly learned English. He would have touched the target whether you had said anything or not.  You could have said “Rabish”, and he would have done the same thing.

You repeat this several times creating an association between the word “Touch” and the action of bumping the target.  Now when you say “Touch” your horse looks around for something to orient to.

The Four Criteria of Stimulus Control
The cue is becoming associated with the behavior, but that’s not enough.  You want stimulus control.  That means the cue meets the following criteria:

The horse touches the target promptly every time the cue is given.

The horse doesn’t touch the target in the absence of the cue.

The horse doesn’t offer some other behavior in response to the cue.

And the horse doesn’t offer the behavior in response to some other cue.

Speed Bump: Teaching with Extinction
So the next step in this process was to hold the target up without saying “Touch”.

The poor horse didn’t know about this rule change so he thought the system was broken.  What do you do when you can’t get your candy bar out of the vending machine?  You bang on the machine.  That’s what the horses would do.  They would bump the target really hard.  It’s as if they were saying to their human:

As their frustration grew, they might grab the target, or bite at their handlers to get their attention.

This is all very typical of the behavior you see in an extinction process.  The animal gets frustrated.  He tries harder, and when that doesn’t work, he gets angry.

When I was first exploring clicker training and I followed these directions, I would see the best examples of targeting yet.  My horse was really bumping the target hard to get my attention.  In fact he was well on his way to picking it up and handing it to me. How could I not reinforce that?  A retrieve would be really fun to train!  But if I reinforced him at this point when I hadn’t given my cue, I would blow my stimulus control.

We taught behaviors in pairs.

Through “the Wardrobe”
The next unit will explain what this means. As you come to understand this process, you will be stepping “through the wardrobe” – not into Narnia – though it may seem that way given the clarity of communication that evolves – but certainly into a world of play.

Coming Next: Ten Things You Should Know About Cues: Number 7.) Stimulus Control and Play: Teaching Cues in Pairs

I hope you will want to share these articles by sending links to this blog to your friends.  But please remember this is copyrighted material.  All rights are reserved. Please do not copy any of the “JOY Full Horses” articles without first getting written permission from Alexandra  Kurland, via theclickercenter.com

6 thoughts on “JOY Full Horses: Ten Things You Should Know About Cues: Number 6.) Getting What You Want When You Want It: Stimulus Control”