Everything  You Need to Know About Cues
At the end of Part 1 I asked: What are ten things you would want a beginner to know about cues?  That seemed like a simple enough question, but look where it has taken us – to neuroscience and the affective emotional systems, to habits and what maintains them, to TAGteaching and the focus funnel, to guide training for horses, to Feldenkrais work and asking questions, to the Premack principle and the creative use of imagery in training.

All that and we still have only three things on our list:

1.) Cues and commands are not synonyms.
2.) Cues are not just verbal signals.  They can include weight shifts, hand gestures and other body language signals.
3.) Cues can come from the environment. 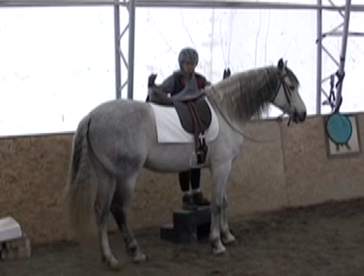 Cue Communication
We tend to think of cues as coming from us, but cues can also be given by our animals.  The behaviors we teach them can be turned around and used by them to communicate back to us.

When we recognize that cues are a two way street, we become much more aware of what are animals are trying to communicate to us.

Panda was the poster child for environmental cues.  She can serve the same function for cue communication.  Guide work is dependent upon the back and forth exchange of cues.  I described earlier Panda’s traffic checks.  That’s a great example both of environmental cues and cue communication.  The moving car is the signal for Panda to stop and back up.  Her actions cue Ann.  Ann must interpret Panda’s sudden change of behavior correctly and allow her to move her out of harm’s way.

When novice trainers first encounter cues, they often think that they are something only they give.  Most of us have spent time around dogs, either our own or a friend’s.  We’re used to telling dogs to sit, to lie down, to come, to leave it!  These are all cues (or possibly commands – depending upon how they were taught) that we’re giving to the dog.

But what about that sad-eyed look the dog is giving you that gets you to stop working on the computer, get up, walk to the coat closet, put on your jacket and your outside shoes, take the leash off the hook where it’s hanging, attach it to your dog’s collar, open the back door and take him out for a walk.  That was quite the complex chain the dog set in motion just by raising his eyebrows and giving you “that look”.

He probably further cued the internal components of the chain by jumping up, wagging his tail, running to the back door, sitting quietly while you put on shoes and jacket and attached the lead.

Back and forth throughout this sequence there was a dance of cues.  Some were given by you, some by the dog.  It is so like talking on the phone.  You have a long story to tell.  What maintains the conversation?  The little interjections your listener gives you that tell you she’s still on the line, still listening to you.  The call hasn’t been dropped by your cell phone network, nor has she gone off to feed her horses.  Without those little sounds cueing you that the connection is still active, and she’s still on the other end of the line, your story would stutter to a stop.

“Are you still there?” You may find yourself asking this as you talk on the cell phone.

“Are you still walking to the door?”  Your dog wags  his tail, or goes into a play bow.  Yes!  That just redirected the human from the kitchen back on track to the door.

We tend to think of cues as coming from us, but cues can also be given by our animals. When you live with animals, you become as much cued by their behavior as they are cued by you.  We know the look our cats give us when they want to be picked up for a cuddle, when they want to be set down again, or let out, or fed.  We become well-trained humans.

Animal Trainers – The Ones to Really Learn From!
I have always known how much my behavior is being cued by my animals.  I know those “looks”.  I have learned to interpret them and respond appropriately to them.  It’s no good picking your cat up for a cuddle when what she wants is to go out.  She’ll simply squirm out of your arms to repeat – louder – her cue.  She knows what many people who travel in foreign countries also believe.  If the foreigner doesn’t understand your language, repeat what you just said, only louder.  In the cat’s case, this often works!

Cats are superb trainers.  They are experts at arranging their households to their liking.  If you want to learn about training – watch your cats.  You don’t need to go any further to find a master trainer!

A Well-Trained Human
Cats are very good at taking the behaviors we have taught them, and turning them around to cue us.  I became very aware of this when one of my cats was a small kitten.  She wanted to see what I was having for breakfast and perhaps share it with me.  I didn’t want to encourage this behavior, so I took advantage of her interest to teach her to sit.  I followed the same procedure I had seen dog trainers use.  I held a small tidbit over her head.  As she looked up to see what was in my fingers, her hindquarters sank towards the floor.  Click!  I gave her a tiny bit of the buttered toast she was so interested in.

Two or three reps were usually enough to satisfy her curiosity. She would go off and leave me alone to enjoy my breakfast without the constant interruption of a too inquisitive paw pushing its way onto my plate.

Over the course of several days the sit began to evolve.  Now we had a proper down on your rump sit.  Click and treat.

One morning she added a slight paw lift.  I grew that from a slight lift of her front foot into a “high five” wave.   It was very cute.

And that’s when she turned the tables on me.  I was in the kitchen not far from the refrigerator.  She very deliberately sat down, lifted her paw and gave me my cue.  It was so like the dog handlers who cue “sit” and “down” with a hand signal, only in my case the cue set in motion a much more complex chain.  I walked to the refrigerator, opened the door, reached in, lifted out the tub of margarine, took off the lid, put a small dollop on the tip of my finger, reached down and let her lick it off my finger.

I had to laugh.  I knew exactly what had just happened.  She had turned everything around, and she was cueing me!

I also understood more clearly than I ever had before that the behaviors we teach our animals can be used by them to cue us.