It was bound to happen.  At the start of this year I said every month this year I was going to use this blog to write a thank you to some of the many people who helped bring clicker training into the horse community.  This is my way of marking the twentieth anniversary of the publication of “Clicker Training for Your Horse”.  Sometimes it was just by a whisker, but I managed to get this done every month – except August.  I will blame the extreme heat that slowed me down to a snail’s pace.

I can’t blame my travel schedule because I travel every month.  August was no exception.  I was out in Washington State at Ken Ramirez’s Ranch for his “Animal Training for Professionals” course.  For twenty years he taught this as a semester long course at the University of Illinois.  He also taught a concentrated week-long version of the course at the Shedd Aquarium.  Most of the time is spent in the classroom but twice a day students get to have some animal time.  For the week-long course at the Shedd attendees got to watch the trainers working with animals.  At the Ranch attendees get hands-on experience working with goats, miniature donkeys and alpacas.

Ken Ramirez with his alpacas

For this course I got to be Ken’s assistant which was a great fun, especially since most of the training sessions involved his herd of dairy goats.  I enjoyed very much seeing what Ken was teaching his herd of clicker-trained goats – what was a match up with what I was teaching my goats and what were some good ideas to take back to them?  It was also very interesting to see how Ken structured the course.  What did he put in his foundation?  What stair steps did he use to take people into the more advanced aspects of training? 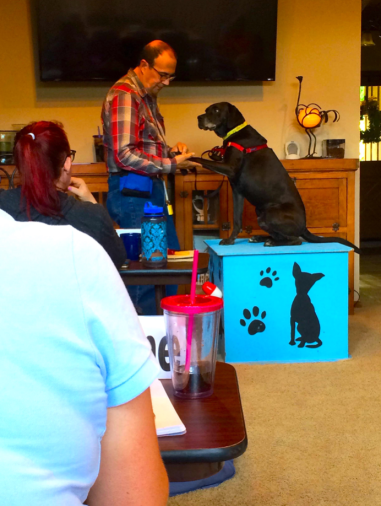 On the third day Ken focused on husbandry, especially as it relates to medical care.  He is uniquely qualified to speak on this subject.  Both at the Shedd and through his consulting work, he has overseen the teaching of cooperative husbandry procedures not just to more animals than most of us will ever handle in a lifetime, but to more species as well.

Ken’s basic strategy can be summed up in a very simple phrase: do it differently.  Every day in your training you should be practicing some form of husbandry skills, but the key to success is don’t try to mimic a procedure someone else is going to be doing.  Your touch is going to be different, so even if you try to make everything the same as the real thing – you won’t succeed.  And besides, you don’t know what you are preparing your animal for.  Is it to stand quietly while you doctor a wire cut on your horse’s leg, or to put eye drops into an infected eye?  We don’t have crystal balls that can tell us what medical procedures our horses will need to tolerate.  X-rays might be standard, and certainly shots, but beyond that what are you preparing your animal for?

Do it differently also applies to getting an animal comfortable with changes in the environment.  Every day introduce some change, something different.  You aren’t trying to scare your horse.  You just want him to get used to the idea that change happens and it’s nothing to worry about.

But even if it “ain’t broke”, can it be better?  Are we stuck in a rut just mindlessly copying what has been done before?  Horses have been trained for thousands of years.  On the surface the training that I learned from experienced horse trainers didn’t appear to be broken.  They could get on and ride their horses.  They could make them jump and cross scary streams.  They could make them go where they wanted.

“Make” was the operant word.  The end result could be very appealing, but if you scratched too far below the surface, you discovered a very broken system.  It was littered with discarded horses and far too many frightened would-be riders.  Something needed to change.

I was very lucky to be learning about horse training at a time when two very important change makers were shaking up the horse world.  One was Sally Swift who brought the Alexander technique into the horse world and changed the way riding was taught in the United States. Sally came regularly into my area so I was very fortunate to have been able to attend many of her workshops.

Peregrine’s mother was a wobbler.  She had a spinal cord injury that impaired her balance and made her very body defensive.  When she was a yearling, if I tried to touch her anywhere, I was met with gnashing teeth and pinned ears.  Her whole body couldn’t hurt, but I couldn’t figure out what was wrong because she wouldn’t let me in to ask questions.

I was reading everything and anything related to horses, and I was eager to learn.  These funny T.E.A.M. circles Linda was describing sounded intriguing.  I tried them on my mare and her world changed.  In minutes her eyes had grown soft.  Her head was drooping.  She was letting me in all over her body – except in one area around her right shoulder.  That was where the pain was.  For the first time she could relax enough to let me know what was wrong.

Within a few weeks I was on an airplane headed to the mid-west to attend a workshop Linda was giving.  I had to learn more!

At one of the T.E.A.M. workshops Linda was letting us experience for ourselves the T.E.A.M. body work.  She let me feel one version of the T.E.A.M. circles, and then she did it another way.  She had her hand on my back so I couldn’t see what she was doing, but, oh my goodness!  It felt so very different!

Her answer meant nothing to me.  “I breathed up through my feet.”

Now I’ve been trained in the biological sciences.  I’ve studied anatomy and physiology.  I’ve done dissections.  I know we breathe through our lungs, not our feet.  And beside, I had hay fever when I was little.  I was constantly congested.  Even breathing through my lungs felt like a foreign notion.  My breath got clogged somewhere at the top of my chest.

But I knew that breathing up from her feet meant something to Linda, so I went in search of the translation to that phrase.  One of the teachers I found lived in my area. She had a horse with a hard-to-diagnose lameness.  She contacted me to see if I could help her with him.  It turns out that the lateral work I was learning helped enormously.  When he carried himself in good balance, there was no sign of the lameness.

His owner, Marge Cartwright, was an Alexander practitioner, and she had also studied the Feldenkrais work.  So we ended up doing trades.  I worked with her horse to help him to be sounder, and she worked with me. Overtime I learned not only what it means to breath up through my feet, but to breathe up from the ground.  Learning that changed how horses relate to me.  It isn’t magic.  It isn’t some mystical gift of a horse whisperer.  It is simply the systematic unblocking of tension.  One metaphor that I love is the shining of a light on the dark places.  These are the places where movement become stuck, and we hide from ourselves the reasons for the stiffness.  This image comes via Anita Schnee, a Feldenkrais practitioner and regular attendee at the clinics I give at Cindy Martin’s farm near Fayetteville Arkansas.

The work Marge shared with me stands as one of the central pillars of what I teach today.  It is woven into every lesson both the ones that I give directly to horses and the lessons that I teach to their handlers.  Unless you live in my area and had the good fortune to learn from Marge, you won’t know her name.  But I owe her a huge thank you for enriching my life beyond measure.  Her work is woven into what I mean by equine clicker training.  If you have participated in a body awareness lesson at one of my clinics, you have been the direct beneficiary of her work. If you have thought about your own balance as you feed your horse a treat, that’s Marge’s influence again.  If you are learning about school figures – circles, lateral work, diagonals, etc. – by walking them without your horse, Marge has a hand in that, as well.

An awareness of balance, no much more than that – an appreciation for balance, an understanding that balance and soundness go hand-in-hand is something that I explored with Marge.

Clicker training for horses might have been little more than the teaching of tricks if it weren’t for this fascination and appreciation for balance.  Instead clicker training is a complex, wonderfully rich and diverse training system that can meet all needs. It includes the fun of tricks, but it doesn’t stop there.  The central core, the pillar that supports everything else is balance.

So thank you Marge for sharing your work so generously.  When you suggested we trade services, I’m sure you had no idea the ripple you were about to set into motion.  You helped make clicker training so much more than simply the pairing of a marker signal with treats.  What we teach and how we teach have become woven together to create a magnificent whole new way of doing things.  We dared to to it differently and look what grew out of it!