It is 5 am.  I have just begun my day by switching on the computer.  Peregrine and Robin are asleep in the indoor arena.  That’s where they hang out at night.  I peeked in a few minutes ago.  They are both still lying down so I tiptoed past the arena door.

Some mornings I like to go in and sit with them, but today it is too cold.  Two days ago we had snow!  It didn’t stick, but even so!  This winter just does not want to let go.  I’m looking forward to the warm spring weather when I can take my computer out and sit with the horses while I work.

Peregrine and Robin have free range of the barn.  They can wander in from the barnyard, through their open stalls into the barn aisle and the arena beyond.  My current task is getting them adjusted to spring grass so they can also go back out onto the fields to graze.  To that end tomorrow’s birthday cake will be “iced” with fresh picked grass.

I’ve just heard them come in from the arena.  Peregrine has gone down to the wash stall, probably to get a drink, and Robin has gone into the end stall and is eating hay from the hay bag that hangs in there.  He’ll come get me soon to tell me that he wants fresh hay – none of this already picked over stuff!

Sharing their “ice cream cone” of a hay bag.

When I fill the hay bag, Peregrine and Robin stand on either side of the stall wall and share the hay that pokes out the top like a giant scoop of ice cream on a cone.  It is good to see that Robin can share his hay so peacefully.  That wasn’t how their relationship began.  Robin was a fierce companion who shared his hay and his person with no one!

One of the main reasons I brought Robin into the family was to be a companion for Peregrine.  When you board, you have no control over what happens to the other horses that live there.  If your horse’s best friend belongs to someone else, and they decide to leave, your horse is out of luck.  He’s just lost friend, and there’s nothing you can do about it.  I didn’t want that to happen to Peregrine, so I got him Robin.

There’s no guarantee that two horses are going to like one another – or even tolerate one another.  As a young horse, Robin was both very independent and very fierce.  What Robin wanted, Robin took.  The other horses all gave him a wide berth.  They knew better than to mess with him.  So that was Peregrine’s main turnout companion.

If I hadn’t formed the third partner in the relationship, I’m not sure they would ever have become friends, but through training I could mediate the relationship.  Robin learned that he got reinforced when he let Peregrine into his space.  If he backed up and made room for Peregrine at the gate, he got reinforced.  If he maintained his place and let Peregrine get his own treat, he got a treat as well.  But if he snapped at Peregrine, if he tried to drive him away, all the focus and attention went to Peregrine.  Peregrine learned that I would protect him.  I would always keep him safe from fierce Robin.

While Robin looks on, Peregrine correctly identifies the green cone.

One of my favorite videos from the on-line course shows me working on color discrimination with Peregrine and Robin.  I start out with two cones hidden behind my back.  I ask one of them to target the blue cone or the green cone, or it might be the one that is bigger, or smaller.  When people watch the video, they tend to focus on this task.  What I see is how well the two horses are taking turns.

When we moved to the new barn, Peregrine had a hard time adjusting.  He’s never been a good traveler, and this marked a huge change for him.  He’d lived at the boarding barn since 1993.  While the construction on the new barn went on around them, the horses lived in the indoor arena.  Peregrine latched onto Robin.  Wherever Robin went, there was Peregrine.  I’m not sure Robin really wanted a shadow, but Peregrine didn’t give him much choice.

Gradually Robin became accustomed to having Peregrine share in everything he did.  Afternoon naps were taken together on the big pile of shavings I had put down for that purpose.  I often joined them, sitting beside Robin while Peregrine stood over both of us.

When we moved into the new barn, I left their stall doors open and let them wander about as they pleased.  I often found both horses sharing one stall.  When I wanted to work with Robin in the arena, Peregrine always accompanied us, tagging along beside us and getting reinforced together with Robin.

I’m ground driving Robin with invisible drive lines. I’m asking Robin to back, and Peregrine is backing with us.

–   I have to interrupt myself here.  Robin is trying to tell me that it is time for breakfast!  –

The morning chores are done.  I’m back at the computer.  Peregrine and Robin are out in the barnyard having sun bathes.  It’s cold.  According to the thermometer it’s just above freezing, but the sun feels warm on their backs.  They’ll doze out there most of the morning while I get work done in the tack room.

I was away this past week teaching at the home farm of Cavalia.  When I got back to the barn on Thursday, Peregrine had decided that Spanish walk was the  “flavor of the month”.  He followed me up and down the barn aisle, lifting his front legs up in the exaggerated extension that is Spanish walk.  This morning has been no exception.  As he “helped” me with the morning chores, he marched around the wheel barrow in his thirty year old’s version of Spanish walk.

I like seeing that he has the balance and the strength to make this the behavior he offers.  I use these offered behaviors as a barometer to gauge how well he is doing.  It’s not a great Spanish walk, but the fact that he wants to offer it at all pleases me.

When I built the barn, I said I wasn’t sure how we would use it.  I would let it evolve, and evolve it has.  The barn has very much become Peregrine’s retirement home.  The footing in the arena is the same deep shavings that we use to bed the stalls.  The arena has become one giant stall in which Peregrine and Robin can take naps.  Many old horses have trouble getting up, especially in the cramped quarters of a stall.  Peregrine has plenty of room to roll, to take naps, to stand with his friend and doze.  They can move from one area of the barn into another.  In another couple of days, the fields will be dry enough, and they’ll be able to go out and graze.

Peregrine is checking to make sure I am in my “stall”.

The barn has become a shared space for all of us.  I can work in the tack room and watch the horses through the big window that looks out into the barn aisle and the barnyard beyond.  Whenever I go out into the aisle, Peregrine and Robin come to see me.  They are always eager for a visit and a game.

They have just come in from outside.  Robin led the way into the arena.  If I go out now, I’ll find them in the near corner catching the last bit of early morning sun.  It’s a good life for them.  Later today I’ll trim their feet.  They are a bit overdue because of all my traveling.  And then they’ll get a good grooming.  They have to look presentable for tomorrow’s birthday party.

And speaking of that – remember you are all invited.  There is still room in my virtual tack room for a few more guests.

The times are 1 pm, 5 pm and 9 pm (eastern standard time).  I’ll be hosting an on-line party at those times.  If you send me an email with the time you can join us, I’ll send you the log in information for the gathering.

I look forward to welcoming you to my barn and sharing Peregrine’s 30th Birthday celebration with you. 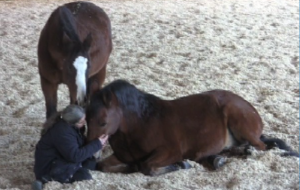 A favorite shared moment with Peregrine and Robin.