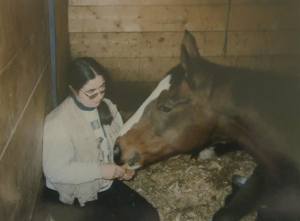 If you’ve read my first book, “Clicker Training for your Horse”, you might have noticed that there are very few pictures of Peregrine in it.  That’s because throughout the period that I was working on it, Peregrine was on stall rest.  I was writing a book that he had helped in large part to create, but on the eve of having it published it was not at all clear that he would ever be sound again.

The culprit was Potomac horse fever.  It had left him with damage to his feet.  It was a frustrating situation to be in.  Peregrine’s big, gorgeous trot had dwindled down to a shuffle.  I would say to my vets, he’s lame, but they couldn’t see it.  That was just how the horses that they saw horses moved.  He wasn’t asymmetrically lame.  What was wrong?

What was wrong was this wasn’t the way MY horse moved.  Finally one of the young associates in the practice decided that maybe there was something wrong – with Peregrine’s hocks.  Sigh.  I knew where the problem was, in his front feet.  I could feel it.

Just to humor me the vet did nerve blocks on Peregrine’s front feet.  His comment as I trotted Peregrine out for him: “I’ve never seen a horse get so sound so fast in his hocks from a nerve block to his front feet.”

For the few minutes that his feet were numbed and he felt no pain, we could all see the beautiful big trot that was Peregrine’s.  And then the pain returned and with it the shuffling reluctance to move.

We tried various strategies.  He’d be okay for a little bit and then lame again.  Finally his feet deteriorated to the point where we were forced to do hoof wall resections on all four feet.  Peregrine was put on total stall rest.  The only time he was allowed out of his stall was to walk the few steps down the barn aisle to the wash stall where everyday I had to treat and rewrap his feet.  This went on for nine months.  By the end I never again wanted to see another roll of duct tape!

Now I am sure there will be people reading this who will be horrified.  Nine months of stall rest!  Just remember this was over twenty years ago.  We might well have better options today that wouldn’t involve confining a horse to a stall, but all I can say is it worked.  The new hoof that grew in over those nine months grew in healthy.  In December we were ready to let him have some limited exercise.  That’s when I got the call from a producer from the BBC.  They were doing a series on animal intelligence.  Could they come film my horses?

You don’t say no to the BBC.  Of course they could come, but I wasn’t sure what I could show them.  The day they arrived was Peregrine’s fourth day off stall rest. So far we had walked around the arena for about ten minutes each day.

The first horse I brought out for them was our senior horse, Magnat.  He was always our consistent superstar.  You could rely on Magnat to show off, and he didn’t disappoint us.  He and his owner, Ann Edie, were just learning piaffe.  We filmed a short lesson, and then it was Peregrine’s turn.

He came into the arena eager to work.  For nine months there had been no clicker training, and suddenly, today everything was allowed.  He was tireless.  We worked mostly at liberty.  Peregrine could have quit at any time.  Instead he kept offering and offering.

It was a wonderful experience.  This was the first time that I had shared clicker training with reporters, and this producer set a high standard for everyone else who was to follow.  He was a superb interviewer.  He knew how to ask good questions which made it fun to share the horses with him.

We’d film a bit and then pause to discuss what I would be showing them  next.  There were six of us in a tight cluster discussing the details of the filming: the producer, his assistant, the camera man, the sound man with his enormous boom, myself and Peregrine.  He joined in every conversation, looking over our shoulders, clearly interested in everything that was being said.

He must have been listening because he pulled out all the stops, showing off his canter in hand and for the first time ever producing piaffe at liberty.  I had no idea this was in him.  We had only worked piaffe in hand or under saddle. This was very much the early days of clicker training.  Peregrine had picked the perfect time to show me what was possible.

The video the producer shot that morning was so good he ended up creating a twenty minute segment just on Peregrine. Unfortunately, as he was preparing the final edit, he learned that he had to cut down on the overall length of the series.  The easiest way to make the time was to cut out the section on clicker training, so Peregrine never did have his moment to shine on BBC television.  That’s all right.  He shone for me that day.  Somewhere buried in my stacks of old VHS tapes I have a copy of the original program before the producer had to cut out Peregrine’s section.  I’m biased, of course, but he should have left it in!

In the horse world one of the deep seated beliefs is that horses are stupid animals. That’s why we need to use force to train them.  “It’s all they can understand.”  But of course, there’s the corollary belief that horses don’t feel pain the way we do, so its okay.

When I first started sharing clicker training on the internet, people would post about their first clicker experience.  These were the early adopters.  They had no idea what they were stepping into.  Their posts always made me laugh.  “My horse is so SMART!!!” they would exclaim.  Their surprise and their delight was so evident in their words.  Their enthusiasm attracted others and encouraged them to give this strange new way of interacting with horses a try.  They quickly joined the chorus of: “My horse is so SMART!!!”

Clicker training helps us to see what I have always known.  Only its not just our horses that are so smart.  It’s all animals.  It was very appropriate that our first interview should be one for a program devoted to Animal Intelligence.

Happy 30th Birthday, Peregrine  When I first went out to the barn with clicker in hand, I had no idea all the adventures you would be taking me on me on.  Thank you for a wonderful journey!