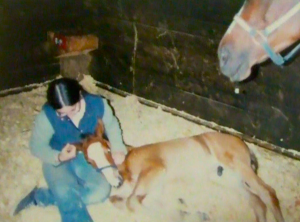 Peregrine was a perfect foal.  I know.  I know.  We all want to say that about “our kids”, but he really was.  He was so people oriented, so easy to handle.  He was exactly the foal you want when you are breeding that “special” horse who is going to be not just your future riding horse, but your best friend and companion.

I’ve met the rambunctious colts who seem to be nothing but biting teeth and rearing legs.  Peregrine was nothing like that.  He was the sweet foal you hope for when you are breeding your one special horse.

When Peregrine was three weeks old, his mother stepped on his hock.  It was puffy so of course I was worried.  I had my vet out to take a look.  This was thirty years ago.  I’ve learned a lot of important lessons since then, and this vet certainly taught me some of them.  For starters he taught me that first impressions matter.

His practice was just outside of Saratoga Springs, home to one of the premier thoroughbred race tracks in the country.  The track and the related breeding farms that were thriving in our area at that time provided him with the bulk of his equine clients.  If you had a lameness question, he was the vet to use – if you were a professional trainer whose horses were as interchangeable as golf clubs.

I can see him so clearly as he and his assistant walked into the stall where Peregrine was waiting with his mother.  They didn’t even try to say hello or to earn Peregrine’s trust.  They were used to the big thoroughbred breeding farms with their wild, untamed colts.  Peregrine walked up to the assistant expecting the same gentle handling he had come to expect of all the humans who had been visiting him.  She threw her arms around him.  She wrapped one arm around his chest and with the other she grabbed hold of the root of his tail and wrenched it straight up in the air effectively immobilizing him.  The vet did a quick exam of his hock and declared it to be nothing to worry about.

Peregrine was released back to his mother.  The exam had taken just a few seconds, but it changed him forever.  He lost his trust of the world.  He had been the softest foal.  Now there was tension in his body.  Where before there had been an openness to engage, now there was newfound fear.

I’ve never written about this before.  The damage that vet did to Peregrine was deep and life lasting.  This may seem like a trivial event to many.  He was just a horse after all and horses need to learn to deal with people – all sorts of people.  But I know the foal I had before the encounter, and the foal I had after.  They were not the same.  I’ve had many reasons for choosing to champion horse-friendly training methods.  This was one of them.

Happy 30th Birthday Peregrine.  Thank you for all the gifts you have given me.