What are you feeling?

The timing is perfect for posting this particular article.  In it I reference Dr. Joe Layng’s 2016 presentation on emotions at the Art and Science of Animal Training conference.  The organizers of that conference have just made that lecture available on the internet.  It is very much worth listening to. (https://www.artandscienceofanimaltraining.org/videos/)

Today I’m going to begin with the July Goat Diaries:

Both goats were now consistently greeting me at the door.  They were accepting and seemed to be enjoying long head rubs before we began the more structured sessions.

Seemed to be enjoying – there’s an interesting phrase.  We use so many emotional labels.  They enjoyed the session.  They were happy to see me.  How do I know what they were feeling?  The answer is I don’t.  I don’t know what a goat is feeling any more than I know what another person is feeling.

I can observe behavior and see how that correlates with what I experience.  Under these conditions, I feel happy.  When I feel happy, I present the following behaviors: I smile.  I get wrinkles at the corners of my eyes.  I laugh.  My shoulders relax.  Under similar conditions, when I see these indicator behaviors in another person, it’s a fair guess to say that he’s feeling happy.

What conditions would make a goat happy?  What does a happy goat look like?

Several years ago at the Art and Science of Animal Training conference, Joe Layng gave a great talk on emotions.  Here’s the example that stuck with me.  Suppose you’ve been in an accident, a doctor might ask, on a scale of one to ten, how much pain are you in?  What does the answer mean?  We all know people who are running for the nearest hospital if they even so much as stub their toe, while others stoically tolerate broken bones.  And that’s the point Joe was making.  The answer does not reflect some absolute answer.  We can’t know someone else’s pain.  The answer tells you what level of intervention that person is asking for.

When I first scratched the goats, I would say they tolerated the attention.  Now they were enjoying it.  My hand was doing the same action, but the response was so very different.  Now they arched their necks into my fingers.  Their ears got floppy, their eyes soft.  And when I took my hand away, what level of intervention did they ask for?  Did they move away relieved that I had stopped?  Or did they push into me asking for more?

I think I was safe in saying that they were enjoying the head scratching.  But whatever they thought of this ritual, I was finding it most reinforcing!

I used another emotional label to describe P at the start of our next training session.  He was eager.

I let P out into the outside run.  I wanted to film this session so I had the camera and tripod with me.  P went straight to the platform.  I should have reinforced him, but I was busy setting up the camera.  Note to self – have camera set up ahead of time.  These initial offerings at the start of a session are too precious to miss.

He went to the platform.  There was no click.  He turned back to me, saw the target, and leapt towards it.  When goats butt one another, they rise up on their hind legs and then curl their necks so they collide horns to horns with their sparing partner. (Figure 3.) 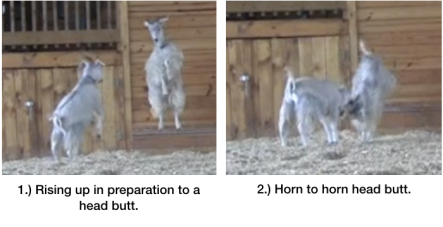 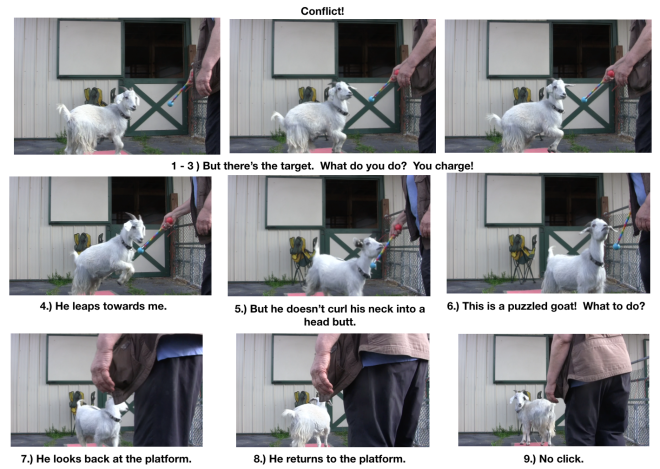 P does everything with so much energy!  If orienting to the target is good, running to it must be better!  His enthusiasm was beginning to create some problems.  I want the energy.  I want the enthusiasm.  I also want him to have the ability to relax and settle.  That comes from being confident in the process.  It comes from understanding how to use the information that cues are providing.  Now is a great time to stay on a platform.  Now is a great time to leave the platform to go to a target.

The Horses have shown me that mats can help to stabilize the emotional yo-yo.  Mats have three parts to them – going to a mat, staying on a mat, and leaving a mat.  All three elements have to be in balance.  If mats equal lots of reinforcement, I don’t want my horse or goat rushing to get to the mat.  Nor do I want them refusing to leave the mat when asked.

My plan was to reinforce P a lot for just being on the platform.  We’d go from the excitement of moving from one platform to the next, to the more predictable just stand still and get clicked and reinforced.  Time will tell if that helps him gain confidence in the whole process.

That’s where we were – just beginning to sort out platforms and the emotional high they created in Pellias.  Yesterday I introduced him to a fun game, one Elyan is really enjoying.  I set a large plastic storage container out at the far end of the hallway.  It’s filled with leftover wood from the construction, blocks that are too small to be really useful, but too big to throw away.  I’m being reinforced for being a pack rat. It turns out they really do have a use.  They add enough weight to the storage box to make it a stable platform for the goats to jump up on at speed.

Elyan had already shown me that he’s very clever at getting up on things.  When I get up out of my chair, he takes my place.  If he can jump up into a chair and turn around, he can certainly jump up onto a box.  So on Monday I let him run to the box, click and treat.  He thought that was the greatest game yet!  I clicked and reinforced him several times for staying on the box.  Then I went to the far end of the hallway and called him.

He jumped off the box and ran to me.  Click and treat!  I want to say he ran joyously, but I am mindful of Joe Layng’s lecture.  Who knows what he was feeling, but the speed with which he ran to me certainly filled me with delight.

I reinforced him for staying with me, then released him back to the box.  He ran down the hallway and jumped up on it.  Such fun!  What a great way to teach recalls and send outs.

Once he was on his box, I could reach my arms around him and give him a quick hug – click and treat.  He seemed to like the contact and started to press in closer to me.

I taught Panda to press her body against my leg.  This was done for her work as a guide for the blind.  When her handler is busy doing something where her focus not on Panda, for example buying something at a store check out counter, Panda will press herself against her leg.  Her handler knows exactly where Panda is.  She isn’t swinging her rear end around into the face of some small child.  She is standing exactly where she should be by her side.

I taught this behavior for a very practical reason.  I reinforced it a lot, and it became a behavior Panda loves to offer.  After almost fifteen years working as a guide, it is certainly one she offers readily.   As I was giving Elyan a quick squeeze of a hug, I thought this was a behavior he might enjoy as well.

Yesterday I introduced Pellias to the box.  He was more hesitant at first about jumping up on it.  I used a target to indicate that was what I wanted.  In true goat fashion once he had one foot on the box, the rest quickly followed.  When I called him off the box, he trotted to me.  And then he turned and raced ahead of me back to the box.  Hmm.  Was this really what I wanted?

With Elyan it seemed fine.  He’s so very good at sticking to my side, sending him out in front of me to the box didn’t seem as though it would create a problem.  But Pellias is a much stronger goat.  Did I really want him running ahead of me?  Is this something I wanted to be encouraging at this point?  I didn’t think so.  So I brought out a target.  He jumped down off the box and began to follow the target.  Click.  He stopped with me and got his treat.

I had him follow the target to the opposite end of the hallway where there was a stack of plywood mats that we had been using earlier.  He hopped up on those.  Click and treat.  We turned back to the box.  He kept his nose oriented to the target as he trotted towards the box.  I clicked.  He wasn’t expecting that.  He had been heading to the box, so he overshot past me, but instead of being pulled in by the tractor beam of the box, he turned back to me.

What a great lesson!  He had so much energy and enthusiasm.  He wanted to get to the box.  But when I clicked mid way down the hall, he stopped with me and got his treat.  And then he stayed with me as we continued towards the box.  That’s a great preparation for putting a lead on and asking him to stay with me even when there is something exciting up ahead.

This is such a fun stage in the training.  I’ve constructed the first layer of building blocks.  Now I can use them to create the next layer.