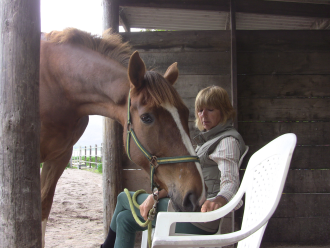 We’re such a verbal species many beginners forget that there are many things that can act as cues.  They feel as though a behavior isn’t really “on cue” until they have a verbal cue attached to it.  Until they can say “sit” to their dog or “trot” to their horse and have them respond, they don’t really believe they have the behavior on cue.

They are forgetting that with horses they are working with the species that is represented by Clever Hans, that master of reading human body language.

Clever Hans gained fame in the early 1900s.  His owner, Wilhelm von Osten, showed him off across Germany.  Clever Hans was said to be able to do complex mathematics.  He dumbfounded the nay sayers.  Even when his owner was out of sight, Clever Hans could still get the right answer.  How was this done? The answer was what you would expect from a clever horse.  He was a master at reading very subtle body language.

He was not alone.  So are most horses.  Hand gestures, where you’re looking, a raised eyebrow, a slight shift in balance: these will all be noticed by a horse, and they can easily become cues.  In fact these subtle signals are often acting as cues long before the human handlers realize what’s going on.

So part of playing with cues is noticing how good your horse is at spotting little changes.  You can easily turn this into a game and certainly a source of laughter.

Unintended Cues
So once again, we are back to play and yet another reason we want to turn being PLAY FULL into a habit.  Here’s another: with so many potential triggers for a behavior you may not be able to detect or deliberately control all the signals your horse is responding to.

Not long ago I was listening to a series of lectures given by Stanford University professor, Robert Sapolsky.  Sapolsky is a primatologist and a specialist in the physiology of stress.  He’s written a widely read book on the subject: “Why Zebras Don’t Get Ulcers”.

In his lecture Sapolsky described a study in which people were exposed to two different samples of sweat. Brain scans recorded their reactions.  The first sample was collected from people who were afraid, and the second sample came from people who were simply exerting themselves.  People in this later group were exercising on a treadmill.   People in the first group were about to jump out of an airplane.  They were having their very first sky diving lesson.  Sweat samples were collected from their arm pits moments before they jumped.

Later when people were asked to smell the two samples, they said they smelled the same.  But their brain scans told a different story.  Even though they didn’t report a difference, different parts of their brains were lighting up. This suggests that they were having very different emotional reactions to the two samples.

If humans can detect such differences, just imagine what our horses and our dogs must be detecting.  So consider this scenario:

It’s a beautiful Sunday afternoon.  The weather is perfect.  It’s a bright, sunny day, and you’ve gone out to the barn to work with your horse.  You have one of those glorious sessions where your horse almost seems to read your mind.  It’s the kind of session that gives you a euphoric high for the rest of the day.  You can hardly wait for your next visit to the barn.

The next day is Monday, and it’s one of “those” days.  There are people out sick at work.  The computers are down.  Your whole day is spent going from one crisis to another.  The traffic driving home is terrible.  It’s just a high stress day from start to finish.  Thank goodness for your horse.  At least your ride will be relaxing.  But when you ask your horse to follow you over to the mounting block, he plants his feet and looks at you as if you’re from Mars, and he hasn’t got a clue what you want him to do.

It’s tempting to throw a fit.  After all, it’s been that kind of a day.  He knows what you want.  He lined himself up perfectly yesterday.

This is why it is so important to be Playful – remember that means full of Play.

You want to build a conditioned response for yourself.  No matter what sort of a day you’ve had, as soon as you head out to the barn – your mood shifts.

The good news is you really can deliberately build triggers for yourself that turn this into a habit.  In the next section I’ll be explaining how.

Coming next: Chapter 2: Turning being PLAY FULL into a Habit

I hope you will want to share these articles by sending links to this blog to your friends.  But please remember this is copyrighted material.  All rights are reserved. Please do not copy any of the “Joyful Horses” articles without first getting written permission from Alexandra  Kurland, via theclickercenter.com