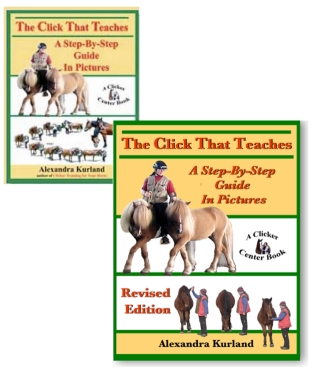 The original and new revised editions of the Step By Step book.

It’s been over a year since I have added to my blog.  In 2018 I celebrated the 20th anniversary of the publication of my first book “Clicker Training for your Horse”.  Every month I published an article thanking directly some of the many people who have helped establish clicker training in the horse community.  My last post was in October 2018.  Then my blog went dark.

November is my collapse-in-a-heap month.  Throughout the fall my travel season competes with preparations for winter.  It’s always a race.  Normally we can expect the first major snow storms around Thanksgiving, but there have been years when they have come sooner.  Deer fencing has to go up, the composter has to be emptied, and so many other “must do” jobs have to be finished before the deep cold descends.

By early November the race is winding down.  The chores have been ticked off the list one by one.  The travel season is over, and I can allow myself a few inefficient days.  And then I  shift back into high gear to prepare all of the conference presentations for the following year.  That was November 2018.

December 2018 marked the start of another project.  I knew I needed to prepare my second book, “The Click That Teaches: A Step By Step Guide in Pictures” for another reprinting.  I was running low on books.  I figured by the end of 2019 I’d be out of the current edition.

The first step was contacting the printer to find out how much of a project it was going to be to getting the book ready for another printing.  The answer was a major one.  They had recently done a major update on their computer system, and they could no longer open my original file.

Aargh! Computers and their updates!

Here’s what I wrote in the forward to the new edition of the Step-By-Step book:

“Don’t take score too soon.  That’s what I kept telling myself.  It’s a sports metaphor.  Don’t give up. Don’t count someone out before the game is over. In training it means whatever the results you’re getting right now – good or bad, desired or not – before you either celebrate or become discouraged, you need to wait to see what comes next. It’s never over until it’s over.

I like metaphors. When I train, they pop out like rabbits out of a magician’s hat. (And there’s one, just to prove my point.) But at this moment, I wasn’t referring to training. I was thinking about the huge stumbling block I had just encountered.

I needed to reprint the book. I was almost out of copies. But the original edition could no longer be accessed by the printer.

Don’t take score too soon. I kept repeating that as I searched through my stack of hard external hard drives for the one that contained the files for the book. I hadn’t opened this particular hard drive in a couple of years. It took me quite a while to track down an adapter that would let my new computer communicate with this older hard drive.

I plugged it in, hoping against hope that it would still work. The power light went on. My computer’s screen filled up with the files from the hard drive, and there it was: all the files for the Step-By Step book.  I clicked on the one that I had sent off to the printer. My computer couldn’t read the file.

I had everything else, the text, the photos, even the original video from which I had created the photos. I could rebuild the book. Instead of the reprint being a small, easily done project, I was now looking at several months of work. Sigh.

So I set to work. And that’s when I discovered what a good thing it was that I needed to rebuild the book. As long as I had to redo every page, I might as well make a few updates.  Those few updates quickly turned into a complete rewriting of the text.

The original Step-By-Step book was written in 2003. this rewrite took place over the winter of 2018 to the summer of 2019. Fifteen plus years of teaching means I’ve added a lot of details to the training. I’ve changed the way I talk about the work. I’ve added new metaphors, found better ways to explain the lessons.”

So here I am a year later.  I haven’t written any blogs, but I have written what is essentially a new book.  It follows the same format as the original, but I have revised and added to every page.

My few months of work turned into a year long project.  As I write this, the new revised edition is still at the printer.  Every step of this process has taken longer than anticipated, including this one.  I was hoping to have the book by mid-November but that hasn’t worked out.  It should be ready to ship to me any day now.  And then I will have it to ship to all of you, hopefully in time for Christmas.

You can order it through my web site: theclickercenter.com