I’m a clicker trainer. The work I do sits under the umbrella of The Click That Teaches. Those are both labels I’m very comfortable with, but for years people have said I need to give my work a different name.

In any case I have tried on many names over the years. One of my favorites is “Constructional Training”.  That comes via Dr. Jesús Rosales-Ruiz from the field of Behavior Analysis.  My translation of this term is this: Complex behaviors are created from smaller components.  When I teach these smaller components first, it becomes easy to ask for the larger, goal behavior.  So I construct complex behaviors from smaller building blocks.

I also want to construct behaviors before I use them.  If I haven’t taught the goats how to soften and yield to the contact of the lead, or how to follow a target, or how to stay by my side, then it isn’t fair game to ask them to walk beside me on a lead.  If they charge ahead of me, and I use the lead to stop them, I’m being a negatively-focused trainer.  I’m using the lead to try to stop a behavior I don’t like.

But if I’ve taught them the components, then I can ask them to back up and come forward in response to cues.  Leading becomes a dance – and in great dancing both partners respond to one another.  They listen to one another.  Both partners direct the flow.  If my partner misses a cue and rushes ahead of me, I can redirect him into another direction.  I’m asking for a known behavior which my partner has learned leads to positive reinforcement.  Constructional training takes me to the dance.  And the dance helps me be a more positive partner for my animal learner.

All of this sounds very grand.  But really it is very simple.  With the goats I was building the components I would need for us to be successful venturing out into the larger spaces of the barn aisle, the arena, and eventually the great outdoors.  Leading was high on the priority list.  These goats would be going home in just a few days, back to the children who were leasing them.  They would be going to the county fair, and hopefully they would know how to lead and not be one of the goats who was dragging his child across the show ring (or being dragged by the child).

We’ve reached Day 6 of their stay with me.  In this report I’ll be illustrating what it means to be a constructional trainer.  In the previous posts I described how I introduced both goats to platforms and to the beginning of leading.  At the start of Day 6 I continued with Pellias’ platform training.

9 am session:  I was learning from previous experience.  I made sure to give the goats plenty of time for their breakfast before asking them to concentrate on training.  By the time I was ready to play, they were lying down side by side having a nap. I scattered some hay stretcher pellets on the floor as a distraction while I went outside to set up the platforms. 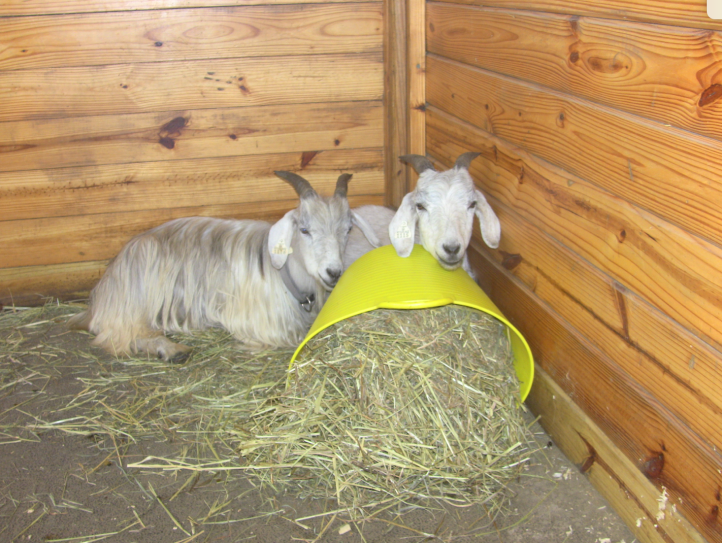 For P I set out both platforms and the ground poles as before, but the platforms were closer together so I could film. P was ready to play, and he did great.  I could move several steps away, and he stayed put.  I loved the consistency P was beginning to show.  Instead of stretching out to try to get to my treats, he was standing in great balance.

When I rattled the target, he changed platforms readily.  He had lots of energy which he was learning to control. I liked seeing him move at speed to the next platform, and even more I liked seeing him transform that energy into an ability to stand still on the mat.

Back and forth between the platforms, I was seeing lots of energy. 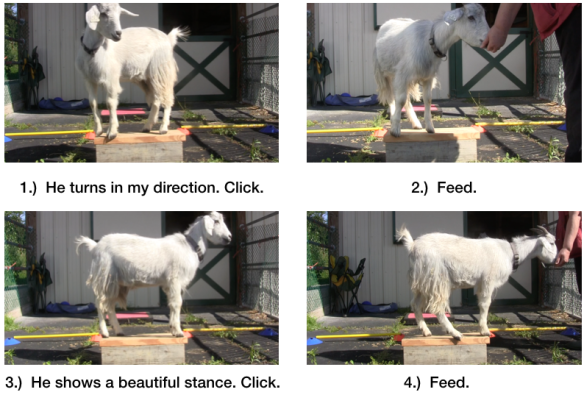 He was such fun to watch as he leapt into the air to bounce from one mat to another.

A couple of times he missed or came off the platform. I waited, and he turned away from me and landed on the platform – excellent. It seems as though he is really getting the game.

That initial introduction to the platform has evolved into what I am working on now.  I am using Michele Pouliot’s platform training as my model.  I introduced Michele in a previous post.  In her position of the Director of Research and Development at Guide Dogs for the Blind, she transformed their training program.  Now all the dogs at that school learn their guide work via clicker training.  In her free time Michele’s training hobby is canine musical freestyle.

Michele is a creative, inventive trainer.  Lots of us use mats and platforms in our training.  Michele took the idea of using platforms and developed it into a fabulous process for teaching the body orientation and cued positions she wants for freestyle.  With the horses I make extensive use of multiple mats, but I have used them in a very different way from Michele’s work.  With the goats I wanted to explore more directly Michele’s use of platforms.

One of the key ingredients of her approach is you want an animal that is magnitized to the platform.  If your dog, goat or guinea pig sees a platform, he’s on it.  Forget trying to pick up a platform to move it.  Your animal will already be on it.  I definitely had that!  In fact I had it with all four goats.  The lessons I’ve described in previous posts had created super magnitized mats and super eager-to-play goats.

So in July you could say I began the initial construction of platform behavior.  Now I was continuing that process.  Those early lessons let me construct this current layer.  What I’m building now will become the components for the next project, and on it goes.

So what am I doing?  Here’s my set up for Pellias and Elyan: at the near end of the hallway I set out two the narrow platforms side by side.  In the middle I have the a single platform next to which I hang a stationary target.  Actually this target is not all that stationary since it is hung from the rafters so it swings after they touch it.  Pellias’ hanging target is a giant kong toy.  Elyan’s is another dog toy, a dumbell with tennis balls at either end.  The storage box is at the far end of the hallway, so I have three stations set up.

I’ve been working them individually in this lesson.  Normally it is Pellias who goes first.  He goes immediately to one of the narrow platforms with a very expectant air of I’m here!  Let’s play.  And that’s exactly what we do.  We play.

I have four positions that we’re working on:

“Front” – I stand directly in front of Pellias as he stands all four feet on the platform.

“Off” – This one will only make sense to horse people.  I stand on by his right side.  In the horse world that’s referred to as the off side.  Left and right would confuse me, but my brain can keep track of the off side so that’s what I’m using.

“Behind” – I stand in front of Pellias but with my back turned to him.

I also want “Ahead”, but I will probably need to use a target to get this one.

I generally begin with “Front”.  I say “front” as I stand in the position.  Click, treat. Repeat.  Then I shift to the other mat.  “Front” – Pellias shifts with me.  Click, treat.  From here I can shift into other positions.  I can step to either side of him.  As I do, I identify the position.  Or I might step to the opposite end of one of the mats so Pellias has to spin 180 degrees around to face me.

He’s gotten very good at following me and shifting position as needed and also staying put and letting me change position around him.  The idea is I will eventually be able to fade out the mats, and he will move into the cued orientations.  Time will tell what dots he connects.  For now it is keeping us both well entertained.

With Elyan I am doing a similar lesson.  The difference between the two is Elyan is much wigglier in a younger brother sort of way.  I have no idea which one is the younger twin, but the difference in actual age is measured in minutes.  The difference in emotional age is much greater.  Elyan is the little brother bouncing up and down excited that Santa is coming.  Pellias is the older, wiser brother who pretends he’s not excited that Christmas is here.  I find them both charming.

So I am busy constructing behavior.  With horses I have built component behaviors that are similar to the ones I am teaching the goats, but not in this way.  I am very much looking forward to seeing how this unfolds.  It is fun working with an animal that not only is the size of a dog, but in so many ways moves like a dog.  That means I can more directly explore some of these techniques that canine clicker trainers have developed.  It is great fun to take someone’s good work and then to see what your own learners do with it.  And then it will be interesting what I take back to the horses.

Happy New Year Everyone!  May you construct great things from the gifts your animal friends give you.

Coming Next: Train Where You Can

Please Note: if you are new to the Goat Diaries, these are a series of articles that are best read in order.  The first installment was posted on Oct. 2nd.  I suggest you begin there: https://theclickercenterblog.com/2017/10/02/   Two of the goats I write about originally came for a twelve day stay in July.  The July Goat Diaries track their training during this period.  In November these two goats, plus three others returned.  They will be with me through the winter.  The “Goat Palace” reports track their training.  I wish to thank Sister Mary Elizabeth from the Community of St. Mary in upstate NY for the generous loan of her beautiful cashmere goats.